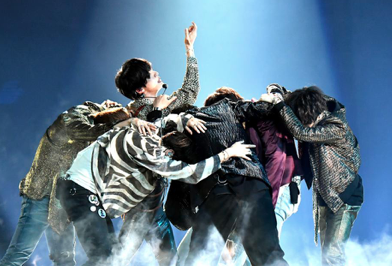 So sick of this FAKE LOVE, but certainly not the dance moves and talent of BTS which once again, did not fail to make headlines the night of the 2018 Billboard Music Awards. BTS were able to not only take home the award for Top Social Artist, but also the love and attention of their ARMYs and possibly, many more new fans. As host Kelly Clarkson was announcing “The biggest boy band in the world,” Twitter fans were quick to send out their love and excitement, while BTS performed their new hit single FAKE LOVE on what was their biggest comeback stage. ARMYs made sure that their excitement was heard loud and proud and they surely made their mark. BTS will once again perform Fake love, on Friday May 25th when they return to the Ellen DeGeneres Show and will once again capture the hearts of their fans.

BTS has quickly risen on the top music charts all over the world with their newly released album, Love Yourself: Tear which not only ranked at number one for album pre-sale on Amazon, but has their new single FAKE LOVE at almost 70 million views in less than a week.

May seems to be a month filled with excitement for both BTS and ARMYs as it is also announced that  a comeback show is in the works for Love Yourself: Tear. The “BTS Comeback Show” will be broadcasted simultaneously via Mnet, Mnet Japan, YouTube, Facebook, and JOOX on May 24 at 8:30 p.m. KST where BTS will be feature performances of not only the title track, but also B-side tracks from Love Yourself:Her. There will also be special videos included in which BTS members pretend to be an ARMY, the members each behaving in their own unique ways, and ultimately giving their behind-the-scenes stories of their brand new album.

I am Yajaira and I am 19 years old. I am from the city of Palo Alto, CA and I am a student as well as working on pursuing an acting career. I hope to utilize my love for writing in order to spread the word on BTS and their success.

Back to Top
close